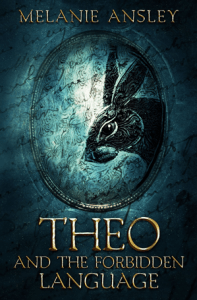 Theo lives in the rabbit village of Willago and harbors a dark and dangerous secret. Reading and writing has been outlawed, but Theo simply can’t resist. When caught, things look dark but Brune, a brutish bear, thinks that Theo has a great destiny and frees him. Together they travel to Mandakar, a human world where animals are being robbed of their speech and enslaved. Risking everything, can Theo achieve his true potential?

The author, Melanie Ansley, gave me a copy of this book for my review.

I adore Theo and the Forbidden Language (The Forbidden Series Book 1). There are certain stories that children read that changes the way they see the world and Melanie Ansley has written one of those novels. Composed in a classic style Ansley maintains an elegance that may seem sophisticated for the intended audience but I think it will encourage the reader to embrace the depth of character and plot.

Theo, a stout little rabbit, is an uncertain hero. He’s clearly willing to take risks as he defies the law of the land to embrace the magic of knowledge through the written word. He is sweet and charming and leaps from the page. Children will identify with Theo’s feelings of inadequacy next to his brother, Harlan. The message is clear that anyone can be a warrior if only the reach deep inside themselves. Children need someone to see that special quality inside of them and Brune a fierce bear, is that for Theo. Brune saves Theo initially but he’s confident in Theo’s ability to save them all.

Another character in which Brune has a strong confidence is the very strong Princess Indigo. Ansley’s narrative in Theo and the Forbidden Language (The Forbidden Series Book 1)” shifts between several characters and Princess Indigo is one of the brightest in a cast of stars. She is strong and capable, and a girl out to save herself. Theo doesn’t embrace Princess Indigo right off. He’s jealous in the face of sharing Brune’s attention with someone else. My daughter, Alex, is in the age demographic of children for whom this book is ideally targeted and I believe that age group will identify keenly with the dynamic of this relationship. One of the sweetest moments in the book is about 50% in and between Princess Indigo and Theo. Theo protests that he’s not a warrior, just a rabbit and Princess Indigo shows a wonderful kindness in her approach to his denial in her reassurance.

The action in Theo and the Forbidden Language (The Forbidden Series Book 1)  is quick and maintains a dangerous tension, but it’s the wonderful characters in the beautifully written world that will keep children reading. There is the feeling of action on a grand scale in Theo and the Forbidden Language (The Forbidden Series Book 1). Mountains loom, baddies tower and the world is a huge place but accessible to the young rabbit and his potential allies. There are moments that may be a little edgy for younger readers, but I found perfectly appropriate in a world where children read the Harry Potter and Hunger Games novels. “Theo and the Forbidden Language” is a different kind of world and so beautifully three-dimensional. Ansley tells a story of complex political maneuvering, ritualistic religion, good guys to cheer for and bad guys for whom to feel sorry all wrapped in an expertly written package.

If you have a middle-school-aged child, pick Theo and the Forbidden Language (The Forbidden Series Book 1) up today. It’ll make a wonderful holiday gift and get them in on the ground floor of a series that is sure to be a long-standing favorite.

Read an excerpt and buy Theo and the Forbidden Language by Melanie Ansley on:

Melanie Ansley was born in Windsor, Ontario and then at an early age moved to China. Her fascination with mythical talking animals started in Shanghai. She has written several screenplays and now spends her time between China and the U.S.A. “Theo and the Forbidden Language” is her first novel.

For more information about Melanie Ansley and her work, connect with her on Goodreads, Facebook and Twitter @WritingRooster.