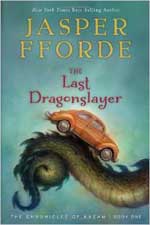 Dragons and the people of Hereford have lived by the Dragonpact for 400 years. When 15-year-old Jennifer Strange, acting manager of a magical employment agency, hears that the seers are predicting that the last dragon will die at the hands of the Last Dragonslayer, she has no idea that she is indeed that Dragonslayer. She’s determined not to carry out the prophesy but something big is coming and no one, not even the Last Dragonslayer, may be able to stop it.

This novel is billed as YA. To me, it’s a continuation of the other exceptional stories that Fforde has written framed in his exceptional made up world. We have seen the Sisterhood of the Lobster in the Thursday Next books. In The Last Dragonslayer (The Chronicles of Kazam) they play a more central role as we learn that they send foundlings, like Jennifer, to indentured servant work situations from which they’ll be released when they’re 18. In a land where driver’s licenses are given based on maturity, Jennifer has had her license since she was 13…and control of the employment agency when the owner disappears in a magical accident.

The plotline is pure Fforde. Jennifer is smart and snappy, and is able to maintain her backbone even in the worst situations. She isn’t a true teenager in our world but she is very believable in Fforde’s “Ununited Kingdom”.

The Last Dragonslayer (The Chronicles of Kazam) is recommended for children over the age of 12 and I suspect the reason for that is that there’s character death. I’m not giving spoilers per se to say that the ending is done in the best spirit of knowing what you have to do even when you don’t want to do it. There’s also the lesson that doing the wrong thing, even if you’ve spent your life doing the wrong thing is sometimes just wasted time. I say these aren’t spoilers because what I’ve just revealed doesn’t actually give away the end of the book. I’d love for my 10-year-old to read this book. She loves dragons and I believe that the novel is age appropriate for her.

Oftentimes YA novels will talk down to children. I’ve said before that one of my pet peeves of YA is sometimes that plot is sacrificed in the spirit of “what children will understand”. My Grandma was a firm believer in the idea that children will understand what you tell them. They may not get it on the first or the second day, but at some point it will click. Fforde doesn’t get lazy with his writing style in The Last Dragonslayer (The Chronicles of Kazam). He writes an entertaining story that everyone will enjoy and everyone will understand at different levels.

The Last Dragonslayer (The Chronicles of Kazam) was a fun adventure that was quirky and magical and filled with characters that you not only remember but you want to see again. They say that kids who don’t like to read haven’t found the right book. I’ll bet that for a lot of kids who think they don’t like to read, The Last Dragonslayer (The Chronicles of Kazam) will be the tipping point to a reader for life.

2 thoughts on “The Last Dragonslayer by Jasper Fforde”