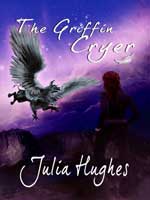 Frankie Shaunessy is a troubled 15-year-old when one day, she calls her dog and a griffin responds. Frankie soon discovers that life isn’t all a person might think it is and that she has people she can truly rely. Can the griffin and his rider rely on her as she helps them find their way home?

There is a unique sense of place in The Griffin Cryer. Frankie is very clearly English and speaks in an appropriate slang for her region. Her specific dialect may throw readers off for a moment (I actually know people who will not read a book if the slang is too foreign for them) but in this global age, a reader will not take long to adjust.

The Griffin Cryer was a good book. Frankie is a fun character who grows exponentially within the scope of the story line. There are certain elements that the reader can anticipate the end result from introduction, but the journey is the point and Hughes gives us a compelling progression. Frankie has a good parent and step-parent willing to stand beside her, although they have their own worries and problems. She has friends that she never realized she had…and a boy she never thought accessible to her.

The baddies are a bit brutal in this novel though no more so than in the Harry Potter series (though in a vastly different way). If I were to give this novel to Alex to read (and we have talked about her reading it), I’d want to discuss the baddies with her. I think the level of violence is suitably appropriate for someone 13+ when children understand that this is just a novel, and that sometimes people are just horrible jerks, but this is fiction; so rarely to the extent we see in the work. The baddies, though exceptionally well written, are not the point of the story. The point seems to be a beautiful progression within Frankie herself.

Frankie is strong and tough and really a great character to read. I’ve said before in reviews that a pet peeve is young adult authors who talk down to children, and Hughes does not do so. Hughes does not sacrifice plot and gives us a very balanced read that keeps the readers on the edge of their seat. Frankie goes from a child to a woman within the story line (in an emotional way), and younger readers will compare her feelings about the world in an abstract way to their own lives. When I started this novel, I did not expect to like it as much as I did. The story moves quickly and logically, and while at times we alternate between Frankie and the rider, the stories come together perfectly. The ending feels a little unfinished, but gives the feeling that Hughes plans to make this novel into a series.

The Griffin Cryer very good read that I would recommend more toward the 13+ market. You can read my review of The Griffin’s Boy, the second book in the series.

One thought on “The Griffin Cryer by Julia Hughes”