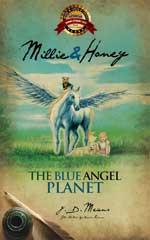 Fifteen-year-old Millie and her dog Honey are called to the Blue Angel Planet by a dream. Can they help the Blue Angels or will the disturbance be too much for even these seasoned travelers?

The author, J.D. Means, gave me a copy of this novel in exchange for my review.

There are some things that are at odds for me in Millie and Honey – The Blue Angel Planet. The novel is written in a style suited for young readers just transitioning into chapter books and introduces them to serious emotional content involving abandonment and cruelty that readers of that generation may not grasp.

Millie is 15, but to my ear read quite a bit younger in her reactions and dialogue which will help younger readers bond with her character. She is a character that demonstrates for children the reasons and rewards behind being responsible and helpful.

Children 6 – 9, will soak up the talking dog of this novel. Honey is Millie’s co-conspirator within the piece. She is friend, partner in crime and the nurturing and calming influence on the characters met. Honey reads as motherly while leaving her fellow characters with the independence that children like to read.

The illustrations in Millie and Honey – The Blue Angel Planet are representative of the work, colorful and in the case of the dog on the unicorn’s back, adorable. My favorite illustration was of the waterfall. Looking at the picture there is a feeling of life and being drawn into the setting. Children will be attracted to the recognizable illustrations and breeds of canine and the idyllic and brightly colored settings.

I thought Alex, who is now 12, would love the dog aspect of the novel and downloaded Millie and Honey – The Blue Angel Planet to her Kindle. She read the first two chapters and then said that she thought the novel was for younger kids and that it was weird that Millie is fifteen because “when you’re six, fifteen is an adult!”

My favorite part of Millie and Honey – The Blue Angel Planet was the poem “The Yorkshire Terrorist” at the end. My sister-in-law and niece have Yorkies and I can attest to the veracity of their interpreted nature in the work.

If you have a 6-9 year-old new reader, pick up Millie and Honey – The Blue Angel Planet for an easy and entertaining read.