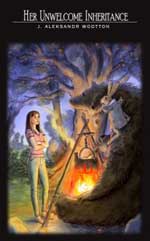 Many years ago Faerie was destroyed in a vicious civil war. There are those, including its ruler who feels that it can once again reach prominence. In order to do so, he needs Petra Goodfellow. Petra is an average teenager whose mother and aunt have more than their share of secrets including the man stalking them, James Oberon the ruler of Faerie. Thwarted kidnap attempts lead Petra to a serious crossroads. What will she do?

The author, J. Aleksandr Wootton, gifted me a copy of this novel in exchange for my review.

Her Unwelcome Inheritance (Fayborn) is in ways a cheeky wink at literature lovers. The inside joke of the piece is that there are several literature-based references. The most overt of them played out in the home of James Oberon as he returns from his journey to find Christine Goodfellow. He finds that his manservant has labeled varied things on a tray “eat me” and “drink me” as though James has returned from his own trip down the rabbit hole. The references are smart and subtle opening this novel to children who have entered high school and are now reading the very works that Wootton references in his wholly unique tale.

Petra Goodfellow, when we meet her, is a perfectly normal girl. Her mother has banned her from social media out of the fear that Oberon will find them and she, of course, has a secret account. She underestimates the threat, thinking that the stupid adults are over-reacting as stupid adults do. She even has a perfectly in character fit of pique. How dare they not have told her about this stalker before! Of course, despite little glimpses of memory she was too young to remember their life before they escaped. Because of this initial naivety, Wootton is able to build the bond between young reader and character and teenagers will become invested in the fate of this character.

The best protagonists are those that we’re not really sure if they’re bad or not and Oberon falls into that category. He is a man looking to rebuild his world. Is that a bad thing? We know that all war involves sacrifice and sometimes the people making those sacrifices aren’t given a choice. Before you know it, the young reader is contemplating large scale morals and their own developing world view. Her Unwelcome Inheritance (Fayborn) is truly a novel to make readers of any age view the world just a bit differently.

Wootton’s narrative covers a lot of ground in quite a short number of worlds and manages to convey the information needed while keeping the reader engaged and entertained. As previously stated, Wootton is obviously quite well read and seems to have studied the overall construction of those novels. He gives the reader credit for intelligence and writes up to his audience instead of modulating his voice for a middle grade understanding. My late Grandma, a retired teacher, always said that children will understand what you tell them and Wootton clearly believes that as well.

Her Unwelcome Inheritance (Fayborn) is a promising start to a new series that I would recommend for young and old alike. Petra Goodfellow’s story has the potential to become a modern classic.

J. Aleksandr Wootton is a Virginia based author. He released a sequel to Her Unwelcome Inheritance (Fayborn) in September 2013 titled The Eighth Square (Fayborn).