I’m happy to announce that the author Calvin Dean is offering two of his books as a free download on Amazon (countries may vary) until July 5, 2014. One of these books was reviewed on this site. 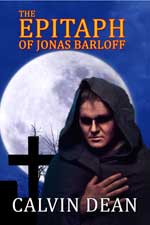 High school student, Daniel Townsend, is on top of the world when he finds out that his father has lung cancer. Suddenly the future that seemed so certain isn’t, and Daniel knows that he must help his father no matter what the cost personally. When Daniel is killed in a head on, hit and run collision, his friend and girlfriend make it their mission to find out what happened. But what role does a crumbling mansion and an old man doesn’t seem to be who he says he is play into the equation? The Epitaph of Jonas Barloff is Calvin Dean’s first young adult novel of mystery and horror. Read my review of The Epitaph of Jonas Barloff. 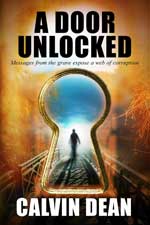 A Door Unlocked is a young adult paranormal thriller published in September 2013.

“Vanessa Fitzgerald wishes she had never heard of Bobby Ray Ledbetter, a released convict who murdered her husband, abducted the couple’s eight-year-old daughter and brutally beat and raped the young mother. While in a medically induced coma, Vanessa receives messages from her husband’s grave – vital clues in an otherwise cold case. But after recovering, the communications cease. Under the guidance of renowned parapsychologist, Dr. Sebastian Dietrich, the transmissions resume, providing valuable leads into her daughter’s location—and Bobby Ray’s accomplices.  Buoyed by his success, Dietrich longs to harness eternity’s knowledge and power by bridging the divide between the living and the dead. He accepts a guided tour into the afterlife from Vanessa’s deceased husband. But will his journey lead to the rescue of the Fitzgerald’s daughter? And what about the others involved in the web of corruption? Only Vanessa holds the key to A Door Unlocked.”

According to Calvin Dean he is a award winning Writer/Producer/Director/Editor and likes to stick his knows in the business of America’s Fortune 100 companies. When he isn’t producing corporate video presentations, he’s at the gym or working furiously at the next supernatural mystery, horror or children’s book.