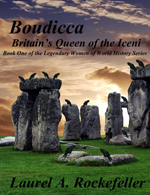 The story of Boudicca, Britain’s Queen of the Iceni, is based on the accounts of the historian Tacitus and archaeology presented by the BBC.

The author, Laurel A. Rockefeller, gave me a copy of this book in exchange for my review.

Boudicca: Britain’s Queen of the Iceni (The Legendary Women of World History) is very much a story with an aim to educate as well as entertain. Like Rockefeller’s subsequent work previously reviewed on this website (click here to read the review), the framework of the tale is that it’s a story told to a child. The storyteller this time is her mother and the goal is to serve as an empowering tale. Things get tough but women, frequently marginalized in our recorded past, can too change the course of history.

Rockefeller doesn’t sugarcoat the history in Boudicca: Britain’s Queen of the Iceni (The Legendary Women of World History) for young readers. She is delicate and doesn’t go into graphic detail, but abuse, rape and potential sexual slavery is mentioned. It is difficult for young women to comprehend the way that Boudicca and her twin daughters were perceived. Twelve-year-old Alex asked me, “Why would her mistress treat her like that?” when Boudicca was abused. While we’re not living the dream as of yet, it’s hard for young readers to realize that at many points in history people were property. They learn about ship captains stealing tribal people from Africa, but not about how truly far back the tradition of slavery goes. She considered Boudicca lucky to have found a lovely person with whom to spend her life and be a strong person who is permitted to express herself and then the next thing happened, and the next, and the idea that a woman of the time never had a sense of peace and security dawned on the young reader which led to an admiration of resilience.

Alex found the dynamic fascinating. Boudicca’s tale once again confirmed her delight at being born in the 21st Century. From the time we meet Boudicca as she’s running from an abusive mistress, the level of courage she showed in Rockefeller’s well-composed narrative appealed to the young Alex and she enters a phase in her life where she’ll embrace a growing independence. “That was a really good story,” Alex told me when we finished the book. In cherry-picking history, Rockefeller chose the right events to captivate my particular young reader.

Lent a colorful flair, Boudicca: Britain’s Queen of the Iceni (The Legendary Women of World History) has the feel of a well-researched work, relating a story from a time where oral history would carry lore of this brave Queen for centuries, Rockefeller replicates the experience easily entertaining children and adults.

I really enjoy Laurel Rockefeller’s work and believe that she’ll be responsible for introducing many young women to historical figures they will admire.

To read an excerpt and buy Boudicca: Britain’s Queen of the Iceni by Laurel A. Rockefeller click:

For more information about Laurel A. Rockefeller and her work, visit her website. You can connect with her on Goodreads and Twitter @Laurealworlds.