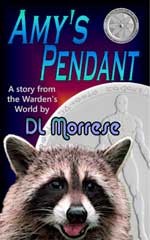 Amy gets a pendant from her cousin, Muce, for her 14th birthday. Her aunt believes it might be magical; and the more Amy handles it, the more she agrees. The pendant starts to glow when Amy visits a spot on her grandparent’s farm. So when life (her mother losing her job) forces her to make the long journey back, Amy revisits the place to find something on the other side of a cave wall that she would have never imagined. Artificially intelligent squirrels, rabbits and a special raccoon named Ralph bring a new knowledge that the medieval world she left is not all that is out there. What is out there doesn’t want her to go home? Can she beat Mark Seven and return to her beloved family with the help of her furry friends?

The author gave me a copy of this novel as an A.R.C. in exchange for my review.

Is Amy like Alice? Is she like Dorothy? Is she like whatever the girls’ names are from the Narnia series? You could say that Amy is a bit like all of them, while remaining completely unlike any of them. Amy is brave, smart and caring.  Set in a medieval kind of world, the story follows a desperate Amy as she tries to better the fortunes of her family when her aunt suggests that the pendant might lead to a treasure. In actual fact, Amy is led to a world she could not have imagined, graced with artificial intelligence.

I loved Amy’s Pendant and thought it the perfect novel for the tween market. The setting is other-worldly to modern kids. Amy’s grandparents house is a 4-hour-walk away; and the gaining of formal education and use of libraries depend on how much money a person has to spend. Food isn’t bought at the market, but traded for other goods and services. When Amy gets trapped in the other worldly place, Mark Seven, the Project Manager, must be sure she doesn’t escape and tell others. She understands she won’t survive trapped as she is so must rely on her newly re-animated friends to help her solve the mystery of returning to her world. When one of her friends is hurt, she takes the chance of not returning to save him.

Morrese’s humor and little hints of levity that made the Warden series so compelling continue in this novel. Amy’s aunt has a cat that can tell when people are allergic or don’t like him, and chooses to love up to those people leaving as much hair as he can (our office dog also has that special ability).

There is a brilliant line 56% into the Kindle copy of the book when Amy breaks down:

She knew it would not solve anything. She knew it was stupid and immature. She knew she should have more self-control, but the tears came, and nothing she knew made any difference to them.

Alex was unable to read this book with me because the time frame in which I needed to have the novel read (she will be given this book to read and a later review will express her thoughts), but when I read her that passage she said that it captured better than anything her own feelings in allowing herself an occasional cry. Amy lives in a tough world and we know that she’s not one to cry or despair easily but when all hope is lost she understood the need to just let it out and get it done.

Amy is a great example for young girls and a fun character to read. If you have a reader 9 to 180, I would suggest Amy’s Pendant for them. It’s fun, fresh and recalls the great novels of a parent’s youth.

For more book reviews on novels by D.L. Morrese that take place in the Warden World, visit my Rabid Reader’s Reviews website and read An Android’s Dog Tail, Disturbing Clock and The Warden Threat.